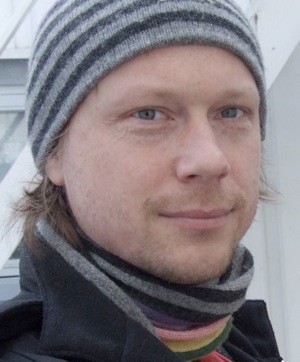 Klaus Abels will give the colloquium on Friday, April 15, at 3:30 in Machmer E37. Professor Abels is this year's syntax guru, and can be found in Barbara Partee's office on the third floor of South College. He will be in residence until the end of the month.

Where does the fine structure of the left periphery come from?

There will be a mini workshop tied to the semantics seminar this week that includes two talks: one by Hans Kamp and the other by Chris Kennedy. The mini workshop will take place on Wednesday, April 13, from 2:00-6:00 in Bartlett 205.

This coming Saturday, the annual Souther New England Workshop in Semantics will be held at UConn. Jennifer Rau will present "Biscuit conditionals, factual conditionals and the nature of conditional clauses," and Andrew Weir will present "Failure of existential exportation in apparently transparent contexts in English." For more information go to the SNEWS website: SNEWS at UConn

Ellen Lau from University of Maryland and Mass General Hospital, will be giving the Brown Bag talk on Wednesday, April 13 at 12-1:20 in Tobin 521B. The title and abstract follow.

Much previous work has shown that predictive contexts can facilitate processing of subsequent words, as evidenced by reductions in reaction times, reading times, and N400 amplitudes. In this talk I will discuss two candidate mechanisms that could account for many of these 'predictive' effects: 1) active prediction of upcoming material and 2) passive priming of upcoming material by concepts and scenarios activated in long-term memory. I will highlight some of the challenges of distinguishing between these mechanisms with classic sentence paradigms, and I will present new data from a study in which we use an artificial semantic priming paradigm in EEG, MEG, and fMRI to look for neural signatures that might be used to distinguish active prediction from passive priming in typical comprehension.

As part of the festivities surrounding MIT’s 150th anniversary, there will be a 3-day symposium, “Brains, Minds and Machines” May 3-5, which includes linguistics and cognitive science as well as neuroscience and AI. The co-organizers are Irene Heim, Tomaso Poggio, and Josh Tenenbaum. Events begin at 4PM on Tuesday May 3, and the opening panel which starts at 5pm is as follows:

The Golden Age—A Look at the Original Roots of Artificial Intelligence, Cognitive Science and Neuroscience

Also of interest, a panel on Wednesday the 4th:

Posted by UMass Linguistics at 11:14 AM

Alice Harris gave an invited lecture at the the Graduate Workshop on Language Variation and Change at the University of Chicago on April 1. The title of her talk was "Origins of Metathesis in Batsbi." An abstract follows:

Blevins and Garrett (1998) investigate in detail the origins of CV/VC metathesis in a number of languages and identify two types of metathesis and a “pseudometathesis”.  For them, “pseudometathesis” is a synchronic process that does not originate through the historical process of metathesis.  They analyze languages in which “pseudometathesis” originates through epenthesis and deletion (1998) or through reinterpretation and generalization of other processes in the language (Garrett and Blevins 2009).  I argue here that metathesis in Batsbi originates as a result of grammaticalization, together with regular phonological processes.  When a function word, such as an auxiliary, grammaticalizes as an affix on a base, affixes trapped between the base and new affix are often lost (Harris and Faarlund 2006).  However, in Batsbi some trapped affixes were not immediately lost, and I argue that this is the source of the variable position of the present tense marker, and that its variable position was reanalyzed as metathesis.   I argue further that the reanalyzed process is true metathesis synchronically, inasmuch as it spreads beyond the environment in which it originally occurred.

Posted by UMass Linguistics at 11:13 AM

On Tuesday April 12th, the McCarthy/Pater grant group will meet at 4 pm to hear Karen Jesney talk about necessary and sufficient conditions for OT/HG differences.

Peggy Speas was featured in an article in the Hampshire Gazette for her work with the Navajo Language Academy. Her work is described in the SAIVUS Blog: SAIVUS Blog » Navajo Gets Help from UMASS Professor

Semantics and Linguistic Theory program out

The SALT 21 program has just appeared. SALT 21 occurs on May 20-22 at Rutgers University. Our own Angelika Kratzer is one of the invited speakers. She will be presenting "What can *can* mean." Recent UMass visiting professor, Floris Roelofsen will be giving a talk (with Maria Aloni) entitled "Indefinites as comparatives." And Danial Altshuler, of Hampshire College, will be presenting: "Towards a More Fine-Grained Theory of Temporal Adverbials."

The schedule is loaded with past and present UMass students as well. Ilaria Frana and Kyle Rawlins are postering: "Unconditional concealed questions and the nature of Heim's ambiguity."  Maria Biezma is postering "Conditional inversion and givenness." And Louis Alonso-Ovalle and Paula Menendez-Benito are postering: "Two Types of Epistemic Indefinites: Private Ignorance vs. Public Indifference."

More information can be found at:  SALT 2011 at Rutgers - Home

Noah Constant gave a talk on March 31 at the colloquium series on Language Universals and Linguistic Fieldwork at Harvard University. His talk was entitled "Appositives After All: Reevaluating Mandarin Relative Clauses."

On the Acquisition Sequence

Posted by UMass Linguistics at 11:00 AM

Email ThisBlogThis!Share to TwitterShare to FacebookShare to Pinterest
Labels: prosody

Barbara and Volodja on the road

Barbara and Volodja were in St. Petersburg March 25-27 for the second “Constructional & Lexical Semantic Approaches to Russian” conference, where Barbara gave a talk on behalf of the team of Borschev, Paducheva, Partee, Testelets, and Yanovich: “Where lexicon, syntax, semantics and pragmatic implicatures meet: the genitive of negation and the genitive of intentionality in Russian.”

Posted by UMass Linguistics at 11:00 AM