Bruna Pereira, visiting scholar at MIT, will present her work on agreement in Brazilian Portuguese in LARC this Wednesday, April 27, at 12:20 in ILC N451. The title and abstract of her talk follow.

In contrast to standard BP, which has all the elements of the DP marked for plural, non-standard BP (1a, b) leaves most of them unmarked. In view of these facts, this paper investigates the syntactic conditions that determine the DP-internal distribution of the plural morpheme in non-standard BP. In order to do that, I assume that the position of the cardinal numeral divides the DP into two domains: the items in its left are marked with the plural morpheme (1a, b), whereas the items in its right are not (1c).

‘The other two red buckets’.

Overall, this paper is organized in three parts. Section 1 presents: firstly, current proposals (Costa; Figueiredo Silva, 2006) on a presumed ‘singleton’ morpheme, which does not account for the facts above mentioned; secondly, the theoretical basis (Chomsky, 2001; Pesetsky; Torrego, 2007) for assuming a new proposal; and thirdly cross-linguistic data for illustrating that, in several languages, the numeral works as a boundary dividing the DP with regards to the distribution of number features (Danon, 2011; Norris, 2014). Section 2 tests, with BP data, the explanation power of this analysis. Finally, section 3 describes structures with wh-determiners (Nunes, 2007; Pereira 2014, 2016) and indefinite articles in the dialect spoken in Minas Gerais that give support for the analysis carried out.

Therefore, as opposed to current proposals, the analysis assumed here shows that the DP-internal plural marking is not only dependent on syntax but also consistent with the DP-internal hierarchy. Above all, it reveals the underlying reason why some constituents of the DP must, may or cannot be marked for plural in non-standard BP.

Stephanie Rich presented the poster “Why not Both? Incremental Processing of Syntactic and Semantic Ambiguities."

Anthony Yacovone presented the talk “Investigating the role of predictability during syntactic resolutions."

The Second Year students present their work at a Mini-Conference this Thursday, April 28 starting at 9:30 in ILC N400. A schedule follows.

9:30  Petr Kusily: Embedded under Past:  Novel data and puzzles for Present and Future in Japanese, Russian and English

11:30 Georgia Simon: Getting Specific about Underspecification

Jeremy Hartman will give an Acquisition Rap at MIT on Saturday, April 30 at a conference in honor of Ken Wexler on the occasion of his retirement. Jeremy’s rap is “Building a corpus for root infinitives.” For more information about the event, and Jeremy’s rap, go here.

Posted by UMass Linguistics at 6:05 PM

Gaja, Brian and Kristine are featured at Data Science Tea

What: tea, refreshments, presentations and conversations about topics in data science

Who: You! Especially PhD & MS students, and faculty interested in data science.

Professor Kristine Yu - The learnability of tones from the speech signal

Many of the world's languages are tone languages, meaning that a change in pitch (how high or how low the voice is) causes a change in word meaning, e.g. in Mandarin, "ma" uttered with a rising pitch like in an English question (Did you go to class today?) means "hemp", but "ma" uttered with a falling pitch like in an English declarative (Yes!) means "to scold". This talk discusses initial steps in using machine learning to find out the best way to parametrize tones in an acoustic space, in order to set up the learning problem for studying how tone categories could be learned. I look forward to your comments and suggestions!

Recent work on phonological learning has utilized computational modeling to investigate the role of universal biases in language development. In this talk I review the latest findings and controversies regarding the status of a particular language universal, Sonority Sequencing Principle, traditionally argued to constrain the sound structure of all human languages. I argue that explicit computational and statistical models of the language development process, when tested across languages (English, Mandarin, Korean, and Polish) allow us to disentangle the often correlated predictions of competing hypotheses, and suggest a crucial role for this universal principle in language learning.

In this talk I give a brief overview to theories of human syntactic comprehension. An important theoretical question in this area is whether the human sentence processor creates and maintains a single syntactic description of a sentence, or if instead it maintains multiple, parallel parses of the input. This question is of wide-ranging theoretical importance for theories of human syntactic processing, but the empirical data that distinguish serial from parallel parsing behavior are unclear at best (Gibson & Pearlmutter, 2000; Lewis, 2000). In this talk I reexamine this theoretical question, and present in progress work with Matt Wagers (Linguistics, UC Santa Cruz) that uses tools from mathematical psychology (Signal Detection Theory) to derive novel empirical predictions that distinguish serial vs. parallel processing, a first step on the road to reevaluating this old, but perptually important, theoretical question.

Posted by UMass Linguistics at 6:05 PM

The Year End Lingle happened on Thursday, April 21, in the linguistics department and about half of the graduating seniors were able to show up to be fêted. They, and Rajesh Bhatt, are pictured below.

Congratulations to them, and to all our other graduating seniors! 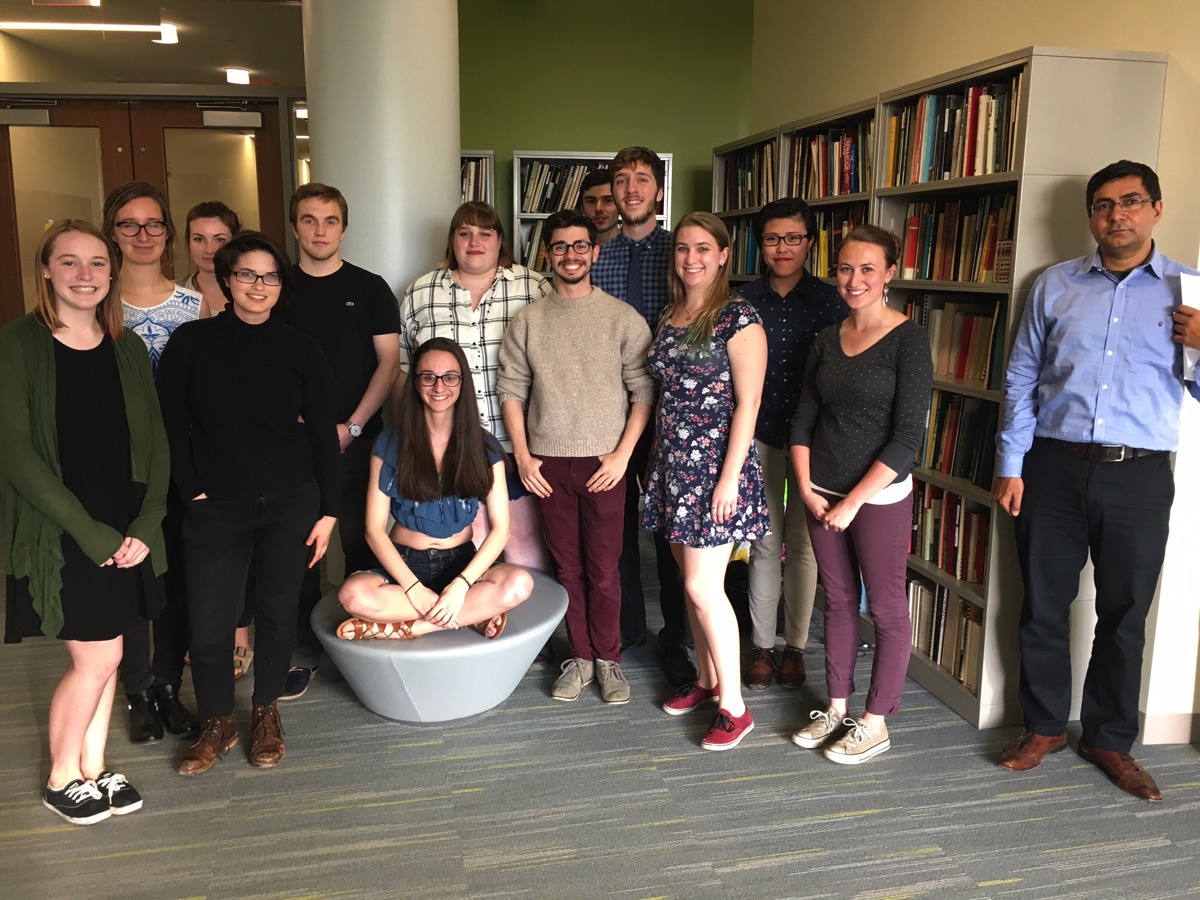 The University of Utah is hosting the 34th meeting of the West Coast Conference on Formal Linguistics this weekend. UMass is represented by:

Ethan Poole, who is giving the talk “The locality of dependent Case,"

Gaja Jarosz is one of five incoming HFA faculty who are giving a short presentation at the “5 at 4” cocktail hour that the Dean of HFA is sponsoring on April 27. Gaja’s talk is entitled “ .” the event is at 4PM in The Hadley Room, Campus Center. 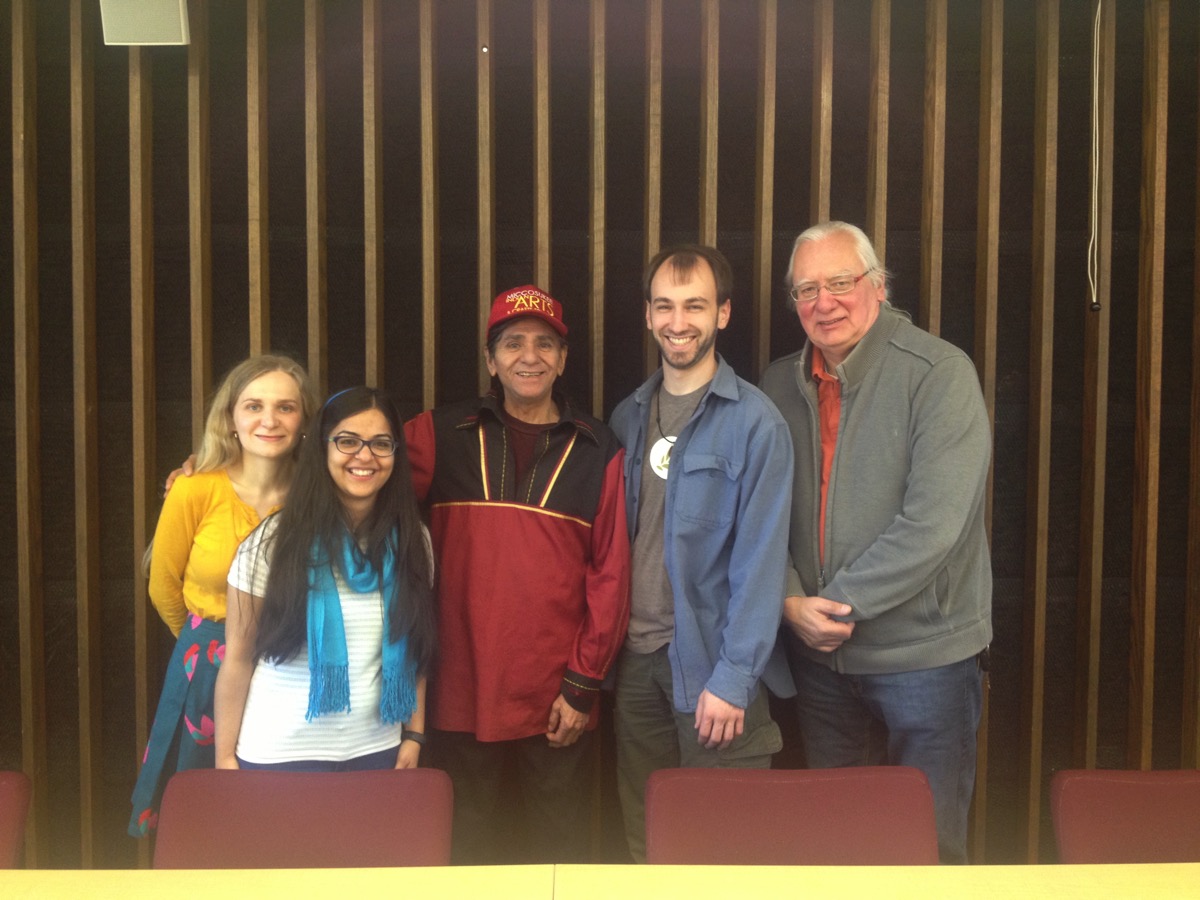