The Final Oral Examination for the PhD for Heidi Buetow is scheduled for 3:00pm on Friday, December 13, 2013 in Bartlett 374. The title of Heidi's dissertation is "Disagreement and the Semantics of Predicates of Personal Taste".  The Chair of her Dissertation Committee is Phillip Bricker.A copy of the dissertation is available in the Main Office.All members of the UMass philosophical community are invited to attend the Oral Exam.

(WHISC has been informed that linguists are members of the philosophical community.)

The Department of Linguistics at Tel-Aviv University is proud to announce the 2nd graduate student workshop in memory of Professor Tanya Reinhart, which will take place on April 24th, 2014.

MA students and PhD students not having submitted their dissertation in linguistics by April 2014 are invited to submit abstracts of their research in all areas of theoretical and applied linguistics: semantics, syntax, phonology, pragmatics, language acquisition, computational linguistics, psycholinguistics and neurolinguistics.

Up to two single spaced A4 pages with 2.5 cm margins, typed in 12-point Times New Roman.

Abstracts must be anonymous and in pdf format.

To submit your abstract, please send it to tau.linguistics.workshop@gmail.com  no later than February 1st. Please state your name and affiliation in the body of the message.

Email ThisBlogThis!Share to TwitterShare to FacebookShare to Pinterest
Labels: calls

The 19th Annual Amsterdam Colloquium will meet from December 18-20 at the University of Amsterdam. UMass will be well represented. Angelika Kratzer gave an invited talk, “Modality and the Semantics of Embedding,” and is one of four participants in the “SMART Cognitive Debate on the Future of Semantics.” Barbara Partee will give a speech in a special event honoring Jeroen Groenendijk, Martin Stokhof and Frank Veltman. In addition Elizabeth Bogal-Allbritten will give a talk entitled “Subsentential modal modification as reduced Transparent Free Relatives.” The wider UMass Diaspora is also well represented:

Bernhard Schwarz will give a talk entitled “At least and quantity implicature: choices and consequences"

Robin Cooper will give a talk entitled “Update Conditions and intensionality in a type-theoretic approach to dialogue semantics."

Roger Schwarzschild will give a talk, with Daniel Altshuler, entitled "Correlating cessation with double access."

Kyle Johnson gave a talk at the linguistics department of the City University of New York on Thursday, December 5, entitled “How to give someone their innocence again."

Posted by UMass Linguistics at 2:03 PM

Here’s a picture taken this morning at the Hot Chocolate Run, where the ‘Linguists and Friends’ took part in both the 5K run (Ivy Hauser, Hannah Greene, Elizabeth Bogal-Allbritten, Kristine Yu) and 2 mile walk (Magda Oiry (and Marie!), Andrew Weir, Claire Moore-Cantwell, and Terri Yu). Not pictured in the post-hot chocolate photo are Magda and Marie. 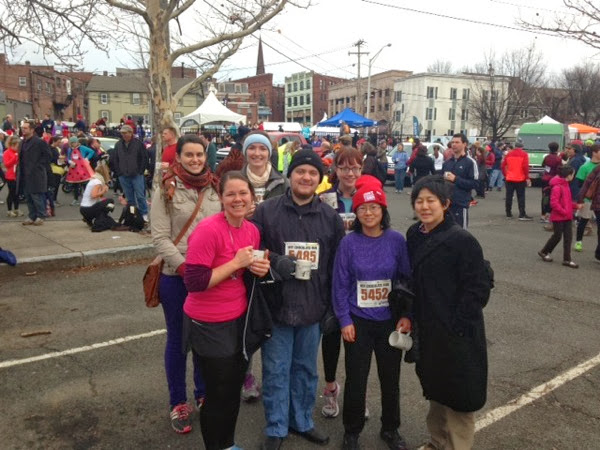 Posted by UMass Linguistics at 2:03 PM