On Monday, April 2, in the Partee Room (South College 301) Fernanda Mendes will present "Inalienable Possession: Possessor's' Plurality Effects and Determiner Status." The meeting begins at 5:20PM. Everyone is welcome!

Judith Tonhauser will be speaking at the Semantics Reading Group on Thursday, April 5. She will present research concerning the temporal interpretation of noun phrases. Hannah hosts the reading group at Barbara and Volodja's place. For more information, contact Anisa Schardl.

ECO 5 at UMass on Saturday, April 7

ECO5 is coming to UMass!

UMass is delighted to host ECO5, a graduate student workshop on
syntax.  All are welcome to attend!  Here are the essential details:

Getting there is easy!  Herter Hall may be found on the following map:
http://goo.gl/DArui
There are metered parking spots along Presidents Dr. and there are
parking lots along Swift Way (Mass Ave.)  Since it is the weekend, you
don't need to pay the meters or have the correct parking permits.  If
you are coming by PVTA bus, the UMass/Haigis Mall stop is right in
front of Herter.

We'll start with a breakfast of bagels and coffee at 10, with talks
starting at 10:30.  At noon, we'll have a pizza lunch courtesy of
UMass and then resume talks during the afternoon.  Then on to
Northampton for the afterparty!

The afterparty will feature dinner, home-cooked by grad students!  In
the tradition of UMass colloq dinners, we hope that guests will bring
drinks.  If you feel so inclined, bring a beverage to share.

We are excited to be hosting ECO5 and we hope to see you there!

For more information about the program, see: http://people.umass.edu/aschardl/eco5.html

The second annual workshop sponsored by the Institute for Computational and Experimental Study of Language will take place this Friday, April 6. The speakers include Luiz Amaral (Languages, Literature and Cultures), Jacquie Kurland (Communication Disorders) and David Smith (Computer Science). For more information, see

Andrew McKenzie has accepted a tenure track position in the Linguistics Department at the University of Kansas. He will start his duties there in the Fall 2012.

The 25th Annual meeting of the CUNY Conference on Human Sentence Processing was held March 14 through 16 at the CUNY Graduate Center. UMass showed up in force.

Lyn Frazier, an invited speaker, delivered a paper, entitled "Two Interpretive Systems for Natural Language," an abstract of which follows.

The desiderata for a theory of language interpretation include at least the following: explaining how humans compute the meaning of novel sentences, including implausible ones; characterizing the incrementality of interpretation; accounting for how interpretation processes relate to conscious awareness; explaining the existence and nature of widespread context effects, characterizing the complexity profile of interpretation (e.g., why DE contexts are more complex than non-DE contexts) and accounting for semantic illusions. The field of psycholinguistics is making successful forays into various aspects of interpretation, e.g., semantic ‘coercion,’ compositionality, scalar meanings, focus and the role of alternatives, implicatures, presupposition, counterfactual contexts, and the rapid impact of various types of stereotypical knowledge, to give only a few examples. I will argue that we also need to recognize the existence of two distinct systems for pairing form and meaning. One is the familiar type-based system that operates whether a sentence has an interpretation that describes a plausible real world situation or an implausible one. The other is token-based and involves the interpretation of repaired utterances, producing plausible meanings only; it depends on details of particular utterances as well as an implicit knowledge of the performance systems. Understanding the ‘performance pairing’ of form and meaning removes the need for the grammar to explain certain puzzling linguistic facts, and it helps to explain certain semantic illusions.

The poster session had many presentations by current and former UMass denizens. Posters from present members of the UMass linguistics community were:

And from the large diaspora of UMass alumni were the following:

"On the processing of epistemic modals" -- Dimka Atanassov, Florian Schwarz and John Trueswell

Notable quote from the conference:

"Which conference is Janet's city really, really great to hold in? -- Chuck Clifton

An excellent, if short, review of Seth Cable's book, "The Grammar of Q," by Sandy Chung has appeared in the latest issue of Language.  In it, Professor Chung reports "There is much to admire in the theoretical reach and empirical depth of this book. Cable shows an impressive command of the literature on WH-movement, pied-piping, and the syntax and semantics of questions. He is willing to engage very broad theoretical issues (e.g. the nature of WH-effects in English multiple WH-questions). The claim that the syntax of constituent questions is transparently reflected by Tlingit, not English, is thought provoking. Overall, the book does indeed, as Cable hoped, 'offer yet another object lesson in the importance of endangered and understudied languages in the development of linguistic theory.'

Pearson and Roeper at the AAAL

For information, go to:

Posted by UMass Linguistics at 9:37 AM

The 27th annual Comparative Germanic Syntax Workshop, which will take place May 31 to June 1 at Yale, has just published its program. In addition to former syntax gurus Caroline Heycock and Klaus Abels, who will be presenting "Hierarchy and order in verb clusters," our own Angelika Kratzer is among the invited speakers.

For more information, go to: http://whitney.ling.yale.edu/cgsw27/CGSW_27/Home.html

Posted by UMass Linguistics at 9:37 AM

Bhatt and Keine at FASAL

The second meeting of "Formal Approaches to South Asian Languages" (FASAL), a conference that started at UMass, met at MIT March 17-18. Rajesh Bhatt was one of the invited speakers, and he delivered a paper entitled "Complex Predicates, Agreement, and Case Licensing. Stefan Keine was also on the program, his talk was "Linearity-based reference restrictions in Hindi." A schedule, and more information about the conference, can be found at http://fasal.mit.edu/.

Rajesh and Stefan dominate the photos posted from the conference, no doubt because of their movie-star photogenicness. Here are two representative examples. 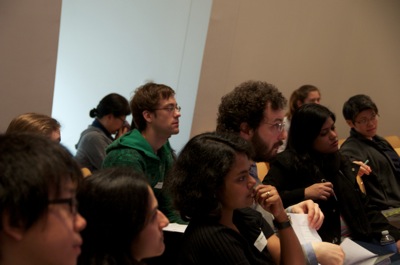 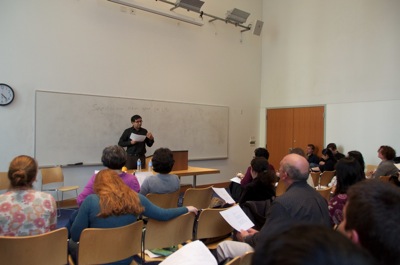 Posted by UMass Linguistics at 9:36 AM