UMass is hosting the third meeting of the American International Morphology Meeting this weekend. The meeting starts this Friday, October 2, with a tutorial from 2:30 to 5:30 on Building digital resources by Kie Zuraw and Matt Wagers. The talks start on Saturday at 9:00 and the conference ends on Sunday. UMass is represented by Hsin-Lun Huang who will be giving the paper “Argument structure and causatively in Mandarin resultatives,” Kristine Yu who will be giving the paper “Tonal marking of absolutive case in Samoan,” and Jaieun Kim who (with Inkie Chung) will be giving the poster “Locality in Suppletive Allomorphy of GIVE in Korean.” For more information, go here.

Posted by UMass Linguistics at 5:43 AM

We'll be meeting this coming Monday, the 28th of September, at 7:30. This will be our SSRG Reads LI meeting. If you haven't signed up to present an issue, there are still some unclaimed! You can sign up here:
http://bit.ly/SSRGReadsLI
We'll meet at the home of Katia and Rodica.
As always, please RSVP so I know how much food to get:
http://doodle.com/poll/6sfvsig4sanr2iqf
Posted by UMass Linguistics at 11:03 AM

Wendell Kimper will give a practice talk for his AMP talk this week in Sound Workshop, which this week meets at 1:15 Friday, Oct. 2.

Andrew Murphy will give a talk this Friday in Syntax Workshop, which meets in N458 at 2:15. The title of his talk is "Cumulativity and Opacity in Syntactic Derivations: Arguments for Weighted Constraints."

Workshop on Modality across Categories

You can learn more here.

SSILA hosts a special symposium in honor of Emmon Bach

Our esteemed and cherished colleague, Emmon Bach, was serving as elected President of the Society for the Study of the Indigenous Languages of the Americas (SSILA) at the time of his sudden passing in November 2014. In honour of his memory and of his many diverse contributions to scholarship based on his extensive work with the Native languages of North America and with Native communities engaged in language documentation, conservation, and revitalization, SSILA is hosting a special symposium at the 2016 SSILA/LSA annual meetings to be held January 7-10 in Washington, DC.

Keine and Bhatt is accepted to NLLT

“Interpretive Verb Clusters,” a paper by Stefan Keine and Rajesh Bhatt, has been accepted to Natural Language and Linguistic Theory. Congratulations!

Alumnus Kai von Fintel is the subject of the Linguistic Society of America's September Member Spotlight.

Joe Pater is an invited speaker to a special session on Learnability at this year’s meeting of the Berkeley Linguistics Society. A description, and call for abstracts, follows.

The 42nd Annual Meeting of the Berkeley Linguistics Society (BLS42) will take place Friday through Sunday, February 5th-7th, 2016, on the UC Berkeley campus. BLS42 welcomes abstract submissions from all areas of descriptive and theoretical linguistics. Abstracts that make use of experimental methods in combination with formal-theoretical analysis are especially encouraged.

The period for submissions is now open. Please submit your abstracts through our EasyChair conference page by 11:59 pm PSTon November 1st, 2015.

The special session will focus on learnability and welcomes papers on theoretical, experimental, computational, and other approaches to the learning of grammatical systems.

The areal parasession will focus on the languages of the Austronesian family. The session welcomes descriptive and theoretical papers from all areas that draw the majority of their data from Austronesian languages.

Abstracts are due by November 1st, 2015, 11:59 pm PST. Please submit all abstracts through EasyChair. Authors will be notified of acceptance by December 1st.

Authors may maximally submit one single-authored abstract and one co-authored abstract. Abstracts, including titles, data, and examples, must fit onto 1 page with 1" margins and 12pt font. References may be included on a separate page. Abstracts must be anonymous; omit names or phrasing (e.g. my paper (Author 20XX)) that would otherwise reveal author identity. Surname-year citations (Author 20XX) that do not identify the author of the abstract as the author of the cited paper are acceptable.

Please fill out all required fields in EasyChair and check at least one box indicating a topic corresponding to the linguistic subfield(s) of greatest relevance to your abstract. All submissions will be anonymized for review.

Posted by UMass Linguistics at 11:01 AM

The Twentieth meeting of Sinn und Bedeutung met at the University of Tubingen September 9-12. UMass alumna Junko Shimoyama was among the invited speakers, and there were many members of the UMass community in the program.

Alumnus Marcin Morzycki gave a talk entitled “Toward a General Theory of Nonlocal Readings of Adjectives."

Amy Rose Deal sends us this picture of some of the UMass-ers in attendance. (From left to right: Maribel Romero, Kylito Rawlins, Ilaria Frana, Maria Biezma, Paula Menendez Benito and Amy Rose Deal.) 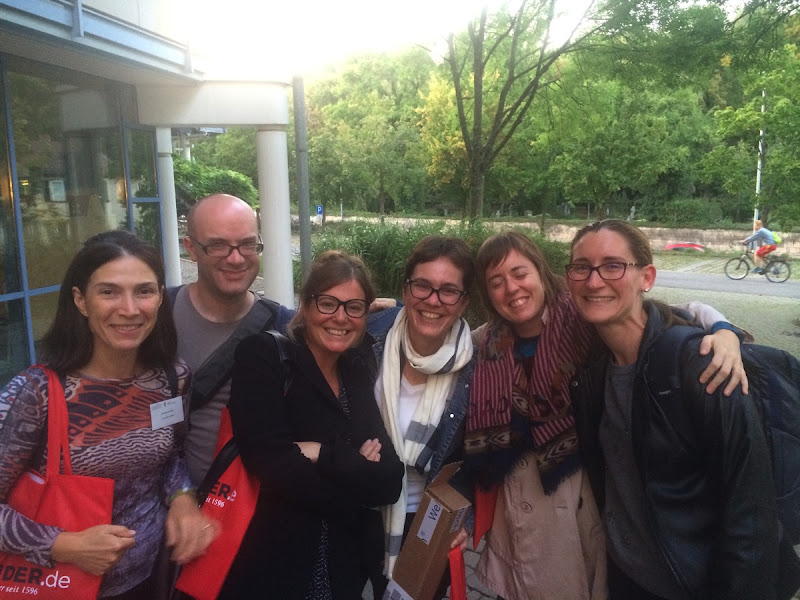 Posted by UMass Linguistics at 11:01 AM