Colin Phillips from the University of Maryland will speak at the department colloquium on Friday, March 2, in Machmer E-37 at 3:30. A title and abstract follow.

In this talk I will discuss two recent lines of research in the cognitive neuroscience of language processing that started from independent puzzles, but that appear to be converging on a common solution. The first puzzle involves apparent discrepancies in the localization results obtained using fMRI and MEG measures of 'semantic' processing. The same tasks and materials yield conflicting localizations when measured using different tools. The second puzzle involves a recent series of studies that undermine received wisdom about the functional status of ERP components and, more interestingly, challenge the widespread view in linguistics and psycholinguistics that semantic composition is tightly coupled to the syntax of a sentence. The solution to both puzzles involves recognizing that the N400, a neural response component traditionally associated with compositional semantic interpretation, is more closely linked to lexical processes and to word-level expectations. This also provides an account of the split personality of the N400 - it is sometimes very 'smart', responding to fine details of the compositional semantic interpretation and pragmatic congruity of linguistic input, but at times it is surprisingly 'dumb', sensitive only to the lexical properties of a word and to associative relations among words. I show how it is possible to turn the dumb N400 into the smart N400. I show that rather than undermining widespread assumptions about language architecture, the electrophysiological evidence instead provides finer-grained evidence on how interpretations are computed on-line. The evidence is drawn from studies in English, Spanish, and Chinese.

Posted by UMass Linguistics at 10:59 AM

Andrew Weir's paper to appear in "English Language and Linguistics"

The next issue of "English Language and Linguistics" will contain Andrew Weir's paper "Left-edge deletion in English and subject omission in diaries."

Posted by UMass Linguistics at 10:52 AM

Kamil Ud Deen (Univeristy of Hawaii) will give two talks this week.

The first is on Monday, February 27, at 4:30 in Dickinson 209. The title is: "The acquisition of raising and passives: implications for linguistic theory."

You can learn more about Kamil Ud Deen at http://www2.hawaii.edu/~kamil/

Jeremy Hartman (MIT) will give two talks this week.

The first is Wednesday, February 29, at 4:30 in Dickinson 209. The title is "Principle B and Phonologically Reduced Pronouns in Child English."

The second is Thursday, March 1, at 4:30 in Bartlett 206. The title is "Clausal Arguments, Experiencer Predicates, and Intervention."

You can learn more about Jeremy Hartman at http://web.mit.edu/hartmanj/www/

Call for Papers: Sinn and Bedeutung 17

Papers will be selected for 45 (35+10) minute oral presentations.Abstracts should contain original research that, at the time of submission, has neither been published nor accepted for publication. One person can submit at most one abstract as sole author and one abstract as co-author. Abstracts should be anonymous, in the form of a PDF file; they must not exceed 2 pages including all data and references and have to be written in 12 pt with 2.5 cm (1 in) margins on all sides.Please submit your abstracts via EasyChair: easychair.Deadline for 2-page abstract submission: April 16Notification of acceptance: June 4Conference dates: September 8, 9, 10Organizers: École normale supérieure, ParisContact us at: sub.paris2012@gmail.comConference webpage: here.

Posted by UMass Linguistics at 10:50 AM 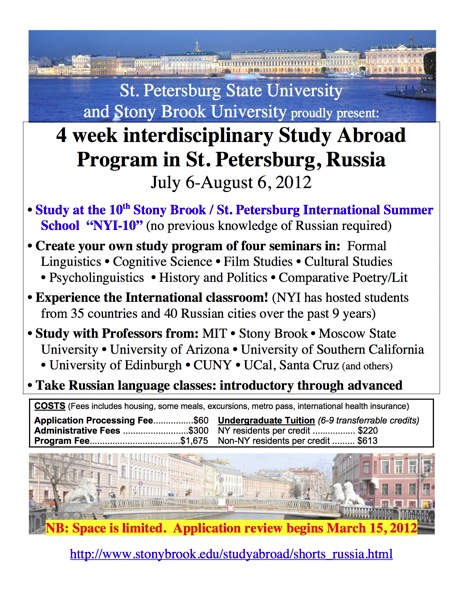 Posted by UMass Linguistics at 10:49 AM