Kyle Rawlins, UMass alumnus, but now at Johns Hopkins University, will give the talk: "Unconditionals and conditionality" in the semantics seminar this week: 4:00-6:00 on Wednesday, April 21, in Bartlett 205.

Lyn Frazier at the University of Chicago

On Thursday, April 14th, Lyn Frazier gave the colloquium talk at the University of Chicago. The title of her talk was "Towards a theory of processing Question-Answer relations." An abstract follows.

There has been a surprising lack of psycholinguistic research on the processing of question-answer pairs. This is striking because asking and answering questions is such a basic use of human language. Further, it may turn out that implicit questions and answers, or comments, may underlie the structuring of discourse if the Question-under-Discussion (QUD) approach is correct. In this talk I will discuss a number of acceptability judgment and processing studies of question-answer pairs. The first half of the talk will focus on the relation required for answers to be fully grammatical. It will be argued that an answer to a question is most acceptable when it matches the syntactic form of the question. With ellipsis, an answer is fully grammatical only if the overt material in the answer has moved to the specifier of a focus projection, as argued by Merchant (2004). In an example like (1a) below, a direct fragment answer is permissible because a that-clause may front (e.g., That he lied, Sam admitted); by contrast, without that (1b), a fragment answer analysis is not fully grammatical (e.g., *He lied, Sam admitted.). When no that is present, a sentence following a question (1b) may be interpreted as an indirect reply, though sometimes this will be odd, depending on the content of the sentence.

An indirect reply will often disconfirm the expectation concerning the Source, as in (1b). A restoration study will be presented showing that, when presented masked by noise, the complementizer that is restored more often when the Source of the answer differs for the direct answer (1a) and the indirect reply analysis (1b) than for examples where the two analyses share the same Source (Clifton, Frazier, Harris, Mack, in progress).

Does an implicit QUD influence sentence processing? In prior work, Frazier and Clifton (2005) argued for the Main Assertion principle, which specifies that elided constituents preferably find their antecedents in the main assertion of the preceding utterance. I will argue that the Main Assertion principle is not sufficiently general and it should be replaced by a general interpretation principle favoring analyses that comment on the QUD. Finally, evidence will be presented showing that a question influences the processing of an answer during the online processing of the answer, as expected on the view where questions and QUDs are the basic mechanism for structuring a discourse.

The syntax reading group will be meeting on Monday 4/18 7PM at 12
School Street Northampton (Brian, Emily and Martin's house) for
practice WCCFL talks. We will be hearing

Alumna Linda Lombardi (PhD 1991) has published her first mystery novel, The Eye of the Sloth. You can read the first chapter and preorder it at her website,http://www.lindalombardi.com. The blurb follows:

Everyone comes to the zoo to see the charming yearly ritual of elephants  playfully stomping pumpkins at Halloween. Small mammal keeper Hannah usually thinks it'’s not fair— -- why do the big animals get all the attention? But this year the fun turns deadly: Victor, lover of charismatic zoo director Allison, is found dead in the elephant yard— -- where he'’d been left with a pumpkin carved to fit his head.

Just when Hannah'’s feeling lucky to be in the background, Allison
reveals her plan to distract the media from the murder: it'’s a
celebration of the new wombat that she promised to the Small Mammal
House. Now Hannah’'s swept into the spotlight and into the middle of some  mysterious conflict between Allison and her boss Chris, with whom she'’s trying halfheartedly not to fall in love.

But the real trouble begins when she discovers that her favorite sloth
has been kidnapped -- —obviously an inside job— -- and then she and Chris are threatened as well. Desperate to find her sloth, Hannah finds out almost too late whom she should have trusted.

At the zoo, everyday decisions— -- from the treatment of a sick animal, to how a keeper handles a dangerous predator— -- can have life-and-death
consequences. What better setting for a mystery?

On Friday, April 15th, Rajesh Bhatt gave the colloquium talk at UC, Santa Cruz. The title of his talk was "Locating Agreement in Grammar," and it reports joint work Rajesh has done with Martin Walkow. An abstract follows.

Seth Cable has been awarded a prestigious Jacobs Research Grant, about which more information can be found at http://depts.washington.edu/jacobsf/index.html

Seth says he will be using this grant to fund his fieldwork in Alaska this summer as part of an investigation into distributive marking and distributive numerals in Tlingit.

Nina Hyams (UCLA)  will be in residence at UConn from Wednesday to Friday of this week. She will be presenting her talk "When Tense and Aspect Compete in Child Language" on Friday, April 22, at 4:30 in Arjona Room 311.

The abstract of her talk:

A particularly robust finding concerning children’s early use of tense/ aspect morphology is that its distribution is strongly conditioned by the lexical aspect (or telicity) of the verb: past/perfective morphology is largely restricted to telic verbs while present/imperfective morphology is found most frequently on atelic verbs. Most explanations for the skewed distribution implicate the cognitive or linguistic mechanisms children use to acquire temporal morphology. Wagner (2001) refers to this idea as the ‘(lexical) aspect first hypothesis’ (AFH), as follows: children initially use tense and grammatical aspect morphology to mark lexical aspect. However, Hyams (2007) shows that the temporal meanings of RIs and other non-finite root forms (in typologically distinct languages) are also contingent on aspect. For example, in early English bare (non-finite) telic predicates tend to denote past events and atelic bare verbs have present reference. Thus, the ‘aspect first’ distribution cannot simply be an effect of the (mis-)mapping of tense/aspect morphology, but is instead related to the event structure of the verb. In this talk I will suggest that during the RI stage the assignment of temporal reference in finite clauses involves a competition between tense anchoring (as in adult grammar) and aspectual anchoring, the later being the mechanism used by children to assign temporal reference to RIs and other non-finite clause (Hyams 2007). This ‘competing anchors model (CAH)’ is an extension of the Hyams’ 2007 ‘aspectual anchoring hypothesis’.  In addition to capturing the parallel behavior of finite and non-finite clauses that children produce, the CAH provides an explanation for several (otherwise) puzzling findings concerning their (mis-)comprehension of various temporal structures.

Email ThisBlogThis!Share to TwitterShare to FacebookShare to Pinterest
Labels: acquisition

The next meeting of the experimental phonology working group will be next Tuesday April 19th at 10 am. We'll be discussing Berent et al.'s 2009 Phonology paper, which can be found on our webpage, along with some other related earlier work:

You'll also find a link there to some readings on Bayesian models that I promised last week. Here's the direct link:

Related to that, Caren Rotello is currently doing an introduction to Bayesian statistics in her class, and visitors are welcome. The class meets MWF 1:25 - 2:15 in the Psych colloq room in Tobin (423?). In today's class, she'll be showing how to do the calculations underlying a simple coin flipping example in R. I think you'll be able to follow even if you are just joining in. And coincidentally related to that, Kristine Yu sent me Robert Daland's very nice handout on the coin flipping example, which I'd be happy to forward to anyone who asks me (I don't feel like I have bulk distribution privileges).

Finally, I've posted slides from the talks by Brian Dillon, James McQueen, and Kristine Yu on the ICESL site, which you can find on the relevant events pages.

Patricia Gubitosi from the department of Languages, Literatures and Cultures writes:

As a part of the Spanish and Portuguese Lecture Series at UMass, I am pleased to invite you to Professor Ticio Quesada’s talk on Thursday April 21, 2011. Dr. Emma Ticio Quesada, from Syracuse University, studies the acquisition of some aspects of nominal expressions by children acquiring simultaneously English and Spanish as their first language in the Syracuse area. The title of her presentation is “The emergence of Determiners in Spanish-English early bilinguals.”

You can find more information about Dr. Ticio at http://as-cascade.syr.edu/profiles/pages/ticio.quesada-m.emma.html

Email ThisBlogThis!Share to TwitterShare to FacebookShare to Pinterest
Labels: talks

Tom Roeper and Joe Pater in the Hampshire Gazette 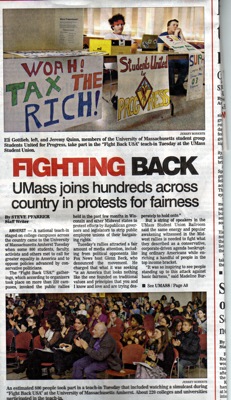