Floris Roelofsen will present "An inquisitive perspective on meaning: the case of disjunction" on Thursday, February 21 at 4:00 in Machmer W-27. An abstract follows.

A primary function of language is to allow for the exchange of information through a process of raising and resolving issues. To model this process, it is useful to have a notion of meaning that captures both informative and inquisitive content. This talk presents such a notion of meaning, and illustrates its advantages with respect to the classical, purely informational notion, focusing on the case of disjunction. The first part of the talk shows how the two main existing views on disjunction can be reconciled adopting an inquisitive perspective on meaning. The second part of the talk presents a uniform analysis of disjunctive questions and assertions in English, paying special attention to differences in form (e.g. declarative vs interrogative) and intonation (e.g. final rise vs final fall).

Posted by UMass Linguistics at 2:15 PM

Foris Roelofsen will present "Polarity Particles," in the department colloquium on Friday, February 22, at 3:30 in Machmer E-37. An abstract follows.

Polarity particles—words like yes and no—play a basic role in communication, and yet, their interpretation and distribution gives rise to a number of intriguing puzzles. This talk seeks to deepen our understanding of polarity particle systems cross-linguistically, revealing both their common core and the ways in which they vary from language to language. This investigation also has wider implications for linguistic theory, since polarity particles offer a valuable window onto the semantics of polar questions and assertions, which both license polarity particle responses. The common semantic core of polar questions and assertions is captured within the framework of inquisitive semantics. Subsequently, the account is extended to capture more involved patterns in the distribution of polarity particles, in particular in response to negative questions and assertions. The main predictions of the account concerning English are corroborated experimentally, and the cross-linguistic predictions are substantiated by data from German, French, Romanian, and Hungarian.

Posted by UMass Linguistics at 2:15 PM

We will meet Tuesday night to have a discussion about constraint  induction.  Everyone who works on constraint induction, come prepared to  talk a little bit about what you do; all others come with  questions/discussion points if you've got them.

This Tuesday, February 19th, Suzi Lima will present a talk in the Language and Cognition Group entitled "Individuation and Counting in Yudja Tupi."

Lisa Sanders will be presenting a talk on ERP measures of phonological learning in an artificial language on Friday, Feb. 22, at 9:30 in Tobin 423.

A new round of Newton International Fellowships - an initiative to fund research collaborations and improve links between UK and overseas researchers - has now opened. The Newton International Fellowships are funded by the British Academy and the Royal Society and aim to attract the most promising early-career post-doctoral researchers from overseas in the fields of the humanities, the natural, physical and social sciences.

The Fellowships enable researchers to work for two years at a UK research institution with the aim of fostering long-term international collaborations. Newton Fellows will receive an allowance of £24,000 to cover subsistence and up to £8,000 to cover research expenses in each year of the Fellowship. A one-off relocation allowance of up to £2,000 is also available. In addition, Newton Fellows may be eligible for follow-up funding of up to £6,000 per annum for up to 10 years following completion of the Fellowship to support activities which will help build long-term links with the UK. The scheme is open to post-doctoral (and equivalent) early-career researchers working outside the UK who do not hold UK citizenship.

Applications are to be made via the Royal Society’s online application system which is available at https://e-gap.royalsociety.org/

The closing date for applications is Wednesday 10 April 2013. Further details are available from the Newton International Fellowships website: www.newtonfellowships.org

Email ThisBlogThis!Share to TwitterShare to FacebookShare to Pinterest
Labels: grants/fellowships

Mike Terry and Mako Hirotani in the news 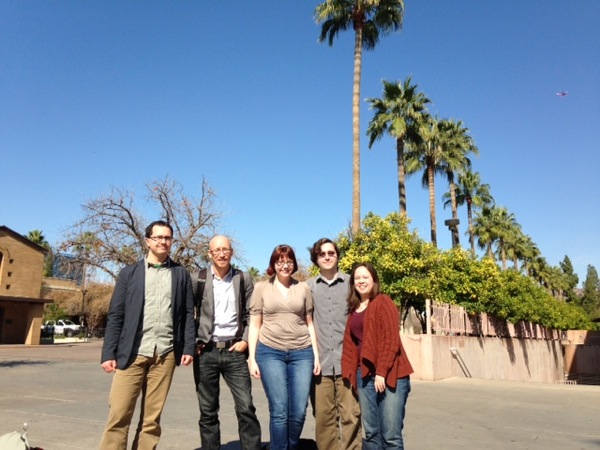 (NB: This was the same weekend that 20 inches of snow fell upon the Happy Valley.)
Posted by UMass Linguistics at 2:14 PM